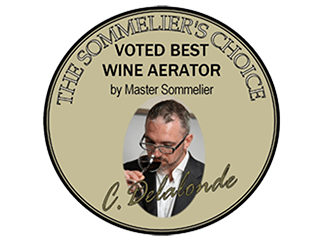 WineWeaver has been voted the best wine aerator by Christopher Delalonde, Master Sommelier.

For those who enjoy the occasional glass of wine, to others who believe a meal is not complete without the perfect complimenting bottle, the WineWeaver® wine aerator is about to change your entire wine experience.

Most people know that a wine should breathe in order to bring forth the best character, bouquet, and taste. However, if you are opening a bottle at the last moment or you wish to serve several different varieties at your next get-together, then the WineWeaver® is a must! This beautifully designed wine aerator allows for perfect aeration by the glass or the decanter. The undeniably stylish design and exceptional performance ultimately sets this wine aerator apart from any other available today! 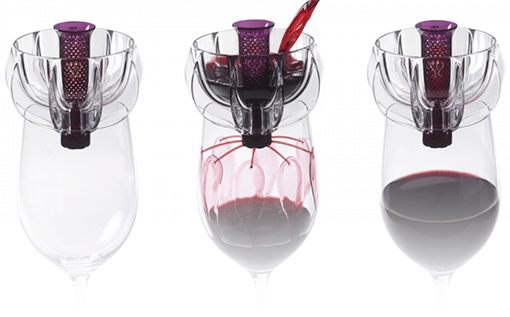 Aeration – exposing wine to air – broadens its character and softens the acidity often found in younger wines, whilst coaxing out those complex tastes hidden in more mature bottles.

WineWeaver® has been voted the best wine aerator because it delivers the highest level of naturally aerated wine served directly to your wineglass or decanter, revealing not only a heightened aroma but a smoother taste and more mellow finish than a wine poured straight from the bottle.

Christopher Delalonde, Master Sommelier and winner of the UK Sommelier of the Year award recommends WineWeaver® Wine Aerators. Christopher, who was previous Head Sommelier to Gordon Ramsay at Claridge’s, talks about wine and the affect of aerating wine using the best wine aerator for professionals.

Christopher Delalonde, MS first started his career in wine under the tutelage of Philippe Faure-Brac, previous winner of the Best Sommelier in the World title.

Christopher expanded his knowledge whilst working for some of the finest restaurants in Europe, including the Michelin starred restaurants of Alain Passard’s ‘L’Arpège’ and Patrick Pignol’s Le Relais d’Auteuil in Paris. Christopher was also Head Sommelier for Gordon Ramsay at Claridges in London when it was awarded its Michelin Star status.

Most notably Christopher’s extensive knowledge and hard work at Philip Howard’s two Michelin Star Restaurant, ‘The Square’ in London’s Mayfair has placed the spotlight firmly on his abilities as a Head Sommelier, where he created an award winning wine list which won much critical acclaim.

Christopher is additionally a member of The Court of Master Sommeliers and holds the title Master Sommelier – a title only available by invitation only to those who have passed the Master Sommelier Diploma and an indicator that the holder has achieved the highest level of proficiency and knowledge in his profession.

He has also been awarded The Laurent-Perrier Grand Siècle trophy for attaining the highest aggregated marks in the shortest time period, and as if this was not enough, Christopher went on to be crowned the Champagne Piper-Heidsieck UK Sommelier of the Year 2010.

He is a consummate professional who constantly strives for perfection whether at work, with master chefs such as Gordon Ramsay or when he is considering wine pairings for the this website.

“The Square in London’s Mayfair has two Michelin stars and won the BMW Square Meal ‘Restaurant of the Year’ award for the second year in a row. The epitome of fine dining, its menu is modern eclectic and, as Restaurant specialist Hernan Castro-Vidal points out, ‘The award-winning wine list, put together by head sommelier Christopher Delalonde and co-owner Platts-Martin, features a global selection that’s heavy on the Burgundy.”

“Gordon Ramsay’s first wholly owned restaurant, Gordon Ramsay, in Chelsea, was awarded three Michelin stars within three years of its launch in 1998. Subsequently Gordon and his team launched some of London’s most high profile restaurants including Gordon Ramsay at Claridge’s, Pétrus and The Savoy Grill.”

Two years after Claridge’s opened, with Christopher Delalonde as Head Sommelier, the restaurant was awarded its first Michelin Star.

EXCLUSIVE WINE AERATOR DISCOUNTS AND NEWS straight into your inbox!

You have Successfully Subscribed!